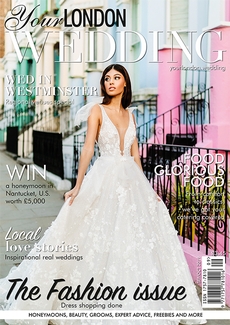 Please mention Your London Wedding when contacting our advertisers.

Don't forget to follow us on Social Media and share our eMagazine with your friends. We hope you enjoy reading it!

Kay and George planned a chilled day with Greek flavour

The thick of it

There's a wealth of venues on offer in Westminster

With its iconic river, extensive canal network and abundant lakes and reservoirs, no wonder London boasts a wealth of picturesque waterside venues

Star of the show

Romance and glamour in Mayfair

Bohemian-style dresses in lace, silk and tulle are floaty, tiered and colourful in this season's most sought after trend. Team with layered jewellery and a floral crown